Another poppy craft. The Poppy symbol is a P inside of a triangle. I made cutouts of these with LEDs on the back that were mounted about an inch off the wall to allow a back glow to them.

I once again made the actual cutouts on my small CNC machine. I then took RGBW LED strip and attached it to the back. I didn't trust the adhesive much so I added some hot glue to make sure it stays in place. Corners were soldered with some leads off of a bunch of capacitors I got for cheap. Great way to source some stuff metal wiring for making jumpers. The wall mounts were also cut from the same plastic and were designed to slip over the head of a screw or a nail.

These sold very well for a few years. They were a pain to make though, it took quite a lot of time and it was pretty fiddly to solder. I eventually decided to make one made from circuit board material.

The main symbol outline is one board, it just has some bus bars running along the outer border with solder pads to mount the led boards using castellated holes. The LEDs are on their own small boards so that I only had to lay out one side of the triangle. 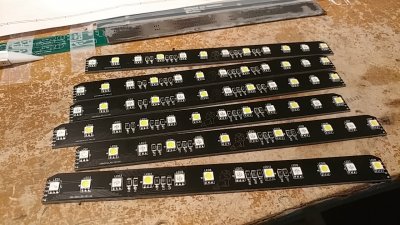 I used a hot air soldering station to solder these as I did not have a reflow oven. Believe it or not, this was significantly easier to do than manually solder the few jumper wires on the original version.

The wall mounts were again made from the same material. I designed them to solder onto the back using castellated holes.

Enough talk about them, here is what they look like: 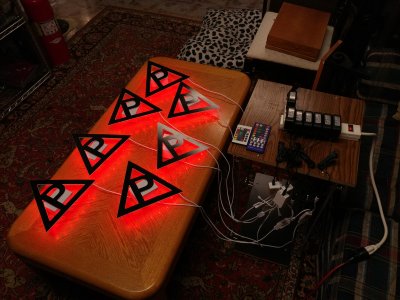 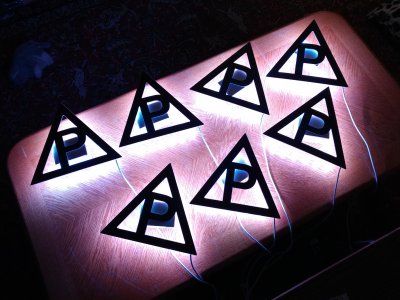